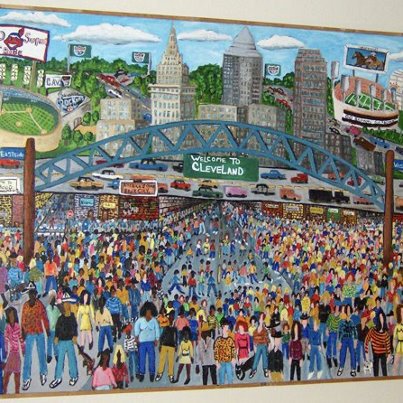 Welcome back to this series on being a white person intentionally moving to a homogeneous community of a different race (inner city African-American Hough neighborhood of Cleveland). You can read the previous articles here, here, here, here, and a response by a neighbor here.

Before writing again, I want to step back and set the context for why my partner and I, separately, became two of the rare white people who decided to integrate into the Hough neighborhood: intentionally moving from predominantly white to predominantly black.

We didn’t come here to “fix the ghetto” because of what was bad (which is what many people assume), but because of what was good: Hough is a convenient location with beautiful old homes and a rich history and culture. We had personal and professional connections in and around the neighborhood. The bank said they’d not only finance the house but thought home values would appreciate in any neighborhood of Cleveland. Well the banks were wrong, but most of the other good things and people that attracted us here have remained in our community.

What made us open to the experience to begin with, though, was a staunch commitment to racial justice. At the time, and even when I originally wrote this post in 2012, I actually thought most people in America today believed in their hearts that all people deserve equal access to social institutions. They just differed in their proposed solutions.

This new series, coming on the heals of the Republican National Convention in Cleveland, is in an entirely new context. I was genuinely afraid of riots breaking out again, especially when Black Lives Matter and the KKK demonstrated on the same day.  White supremacy has been breathed all new life by political leaders who profit from spewing racist and divisive language. Those attitudes and ignorance continue in part because while legal segregation is over, but 50 years later residential segregation is still going strong.

One of the things that keep us apart is the unregulated social “race line” that has created our homogeneous communities–African American Hough and the white suburb where I grew up. 50 years after the Freedom Riders, here is a little documentation of one person’s experience of crossing the lines of racial segregation in the 21st century:

“It’s not a gated community, you know.”

This is the response we got from the previous city councilwoman, Fannie Mae Lewis, when we told her at a Ward meeting we were looking at homes in the neighborhood. She wanted to make sure we knew what we were getting in to.

But she didn’t need to bother. We had dozens of people, white, black, and many other ethnicities, warn us of all the dangers and difficulties of moving to Hough. “Hough is rough!” is the mantra. I even had a Chinese Case student tell me, “You’ll get shot if you drive through that neighborhood!”

While we have taken steps to keep ourselves and our kids safe, we’re not afraid of risk if we can see the benefits. But the risk is hyped way beyond reality.

One of the things I enjoy about black culture is the tradition of creativity in wordplay. It turns out racial epithets are no exception. I just ignored these comments shouted from front porches and the second or third time people saw me walking or driving the same way at the same time, I didn’t hear it any more.

When the novelty of my face wore off, the names stopped. One time, I shouted back from my car window, “I’m your neighbor and I’m not leaving!” and I got a face full of beer in response. I was better off keeping my mouth shut.

“You’ll get a lot for this house when you’re done.”

When we were fixing up the foreclosed, abandoned house, many people assumed we were “flipping” it. We got a lot of compliments, and many folks who lived in the neighborhood or who used to live there and were visiting stopped to tell us how happy they were to see one of the abandoned homes fixed up.

Home values have certainly changed since then, and half the houses on our block have been vacated since we moved in, but the gesture to save one of the originals has been noticed and appreciated. Staying and living in the house has been even more appreciated.

“I wish I had pretty white skin like you.”

This just about broke my heart. An elementary-age neighbor said this to me. If you think only white people soak up white supremacy, you’re wrong.

My response was to tell her I think she is pretty just the way she is. A year later, her tune changed and she said to my sons, “You’re awesome and you’re wonderful. Because that’s how Meagen talks to us.”

That is the ultimate message we want to send our neighbors. We looked past the headlines and the doomsday statistics to see a place we could make home. White supremacy is not just white people degrading others; many black people feel & internalize that racism, and can do so at a disturbingly young age. Even small comments valuing the beauty of people of color and their culture can really make a difference, especially for children.

Valuing people of color and their culture is something all people can do regardless of their race or where they live.

“You really know how to read!”

We go to an Afro-centric Catholic church in the neighborhood, and I have sometimes been a lector. Other church members have been pleasantly surprised when, as a white person, I have demonstrated cultural competency by reading Bible verses with the level and style of oral performance valued in the African-American community. No one is going to pretend I’m black, but real integration means you can at least blend in a little by following someone else’s cultural lead.

Now six years in the neighborhood (when this was written in 2012), when the kids on the block are out playing I can barely get down the street or out of my car without someone asking to either come play or have our kids come over. Now our struggle is not to gain people’s trust, but to maintain healthy boundaries—just like in any neighborhood where friends and family are frequently requesting your presence.

Crossing racial lines is not easy. It’s incredibly awkward, in fact, and many people get easily discouraged. On top of these unique interactions, there is the normal level of crime in the city, plus all the disagreements and annoyances that happen in any neighborhood (“another branch from her tree fell in my yard!”), made worse by the absentee landlords and banks. I hope to demonstrate that with some patience and realistic expectations, you can cut through the crap to find genuine community across racial lines.

And the need to combat white supremacy is critical. Due to the increased visibility of deaths of innocent black victims of hate crimes or police brutality, I think white supremacy and institutionalized racism is only going to slow down if we can have the courage to cross our invisible racial lines, right now, whoever and wherever we are.

A childhood friend has asked how her family can address this issue, even without moving. Look for a new post at the end about talking to children about race.

Thanks for listening to one person and one family’s experience!

What are some of your experiences of integration in the rust belt?