I am not great at trivia, but am fascinated by local history that you can see, feel, and smell every day. Learning the history of Hough helped me appreciate how the community has pulled itself up by its own bootstraps. It also taught me: never be a slumlord.

8000 BCE. Humans and mammoths co-exist in Northeast Ohio until we hunt them into extinction. Hough probably not settled due to bugs.

1600s. Iroquois take over Ohio in a bloody war with various tribes.

1700s. Iroquois move east to fight the French and English. Wyandot move into region (most artifacts near Sandusky). They were known for their “rough hair” (read: mohawks—my husband is a descendant.)

1854. Area settled as a farm by Oliver and Eliza Hough.

1860s. Oliver and Eliza die, and their land is divided into parcels.

1872. Hough incorporated into Cleveland, which doubled in size in 10 years. Millionaire’s Row built on Euclid Avenue.

1900s. Hough Bakeries founded at 8703 Hough Avenue and Rainey Institute on E. 55th. Our two-story, foursquare house was built, along with several blocks of similar structures that same year.

1920s. Apartment buildings constructed as wealthy residents migrate to the Heights to avoid air pollution from their own factories. Millionaires destroy their homes as they move out.

1950s. Urban renewal and highway development force African-Americans from Central into Hough, increasing from 14% to 75% of its population. Realtors threaten reduced home values; Polish, Irish, and Spanish-speaking immigrants move out.

1960s. Mounting racial tension caused by deteriorating and overcrowded housing owned by whites and occupied by blacks. (Tip: Don’t be a slumlord) Population peaks at 66,000 residents. 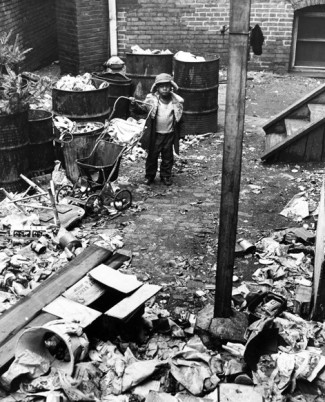 July 18-23, 1966. Hough Riots cause massive property damage and four deaths, and required the assistance of the Ohio National Guard. A grand jury ruled that the Communist Party organized the uprising, but poverty and housing issues are more believable causes.

If you’re looking for another history of Hough, check out The Encyclopedia of Cleveland History.

A huge thanks to Christopher Busta-Peck, Founding Editor of Cleveland Area History for fact-checking my dates against the primary records.

And here we are! What are your lessons from Hough’s history? How about your own neighborhood?

2 thoughts on “How Did We Get Here? A History of Hough”